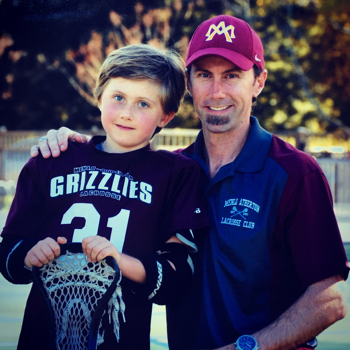 SixFifty Lacrosse is directed by former Johns Hopkins University attackman and current Menlo-Atherton High School offensive coordinator, Matt Bond. Matt is also the director of the Menlo-Atherton Grizzlies Youth Lacrosse club and the San Francisco Region Director of Advnc Lacrosse. He has coached at the youth and high school levels in Maryland, Connecticut, Florida, England, and California since 1995.

Though born and raised in New England, Matt played his high school lacrosse in the non-hotbed state of Florida. Because of this, he’s familiar with the challenges of pursuing the dream of playing at the collegiate level. In 1991, Matt was just the third high school lacrosse player out of Florida to be recruited and play at an NCAA Division 1 school. In 1994, Matt’s brother, Adam, became the fourth high school player from Florida to go D1 and joined Matt as an attackman for the Blue Jays. Coach Bond has been passionate over the past 20 years of working with young people about helping them pursue their athletic and personal dreams with hard work, integrity, and humility in reaching for their highest potential in all aspects of life.

Prior to launching SixFifty, Matt served for 6 years in pastoral leadership positions at two of the largest churches on the west coast while attending Fuller Theological Seminary. Prior to that, he served for 11 years as the Area Director for Young Life in New Canaan, CT and Newport Beach, CA. Matt’s wife Katie is a doctor of clinical psychology in private practice specializing in childhood and adolescent development.

You can read more about Coach Bond’s background and coaching philosophy in Press & News.